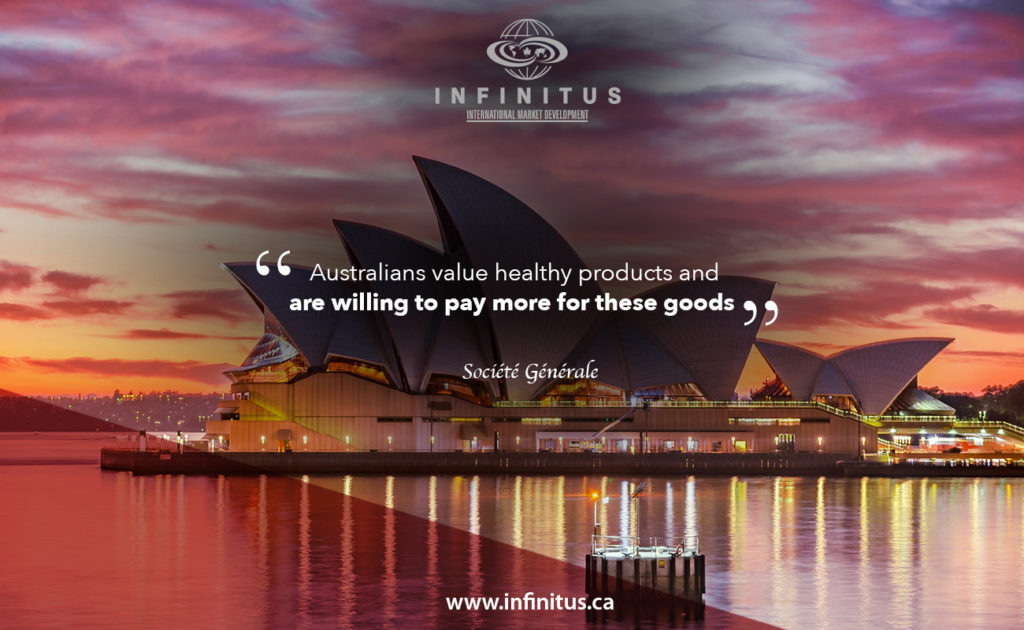 Euromonitor says in its report Consumer lifestyle in Australia, that “Australia has one of the world’s wealthiest and most digitally-advanced societies, with consumption fuelled by buoyant consumer confidence, high wages, and low unemployment”.

Indeed, with a total population of 24.598.933 (from which almost 80% is urban population). It is also important that the purchasing power of Australians has increased in the last 15 years (more than 40% in that period).

Something very important? “Australians value healthy products and are willing to pay more for these goods. As national production does not cover all their needs, consumers are receptive to imported products” according to Société Générale.

We are Social found out that “The number of internet users in Australia between 2018 and 2019 remained unchanged. However, the number of active social media users has continued to increase by +5.9% and the number of mobile social media users has increased by +6.7%, Facebook still tops the social media platforms with 16 million users. Instagram has continued a steady growth of +2.1% and LinkedIn has seen a recent growth spurt, up +10%in quarter-on-quarter growth of advertising reach. The two losers during the past quarter have been Twitter and Snapchat; down respectively -2.3% and a whopping -14% in quarter-on-quarter growth in advertising reach respectively”.

A large portion of the Australian market is what is called "early adopters" who are those who like to try new technologies before anyone else, Australians are keeping an eye on innovative products from Europe in particular.

As in most of the world, in Australia, there is an environment of concern about the environment and sustainable business practices, so that consumers tend to look for products manufactured under this type of practices or that contain natural ingredients. Société Générale says “Consumers’ growing health awareness is driving the demand for healthier food and beverages and a healthier lifestyle in general”.

Infinitus offers you its experience introducing new products to Australia! Remember that we have experience in every continent in the world in areas such as Consumer goods, Biotech, ICT, Education, Natural products, OTC products, Pharmaceutical products, and food and beverages industries.